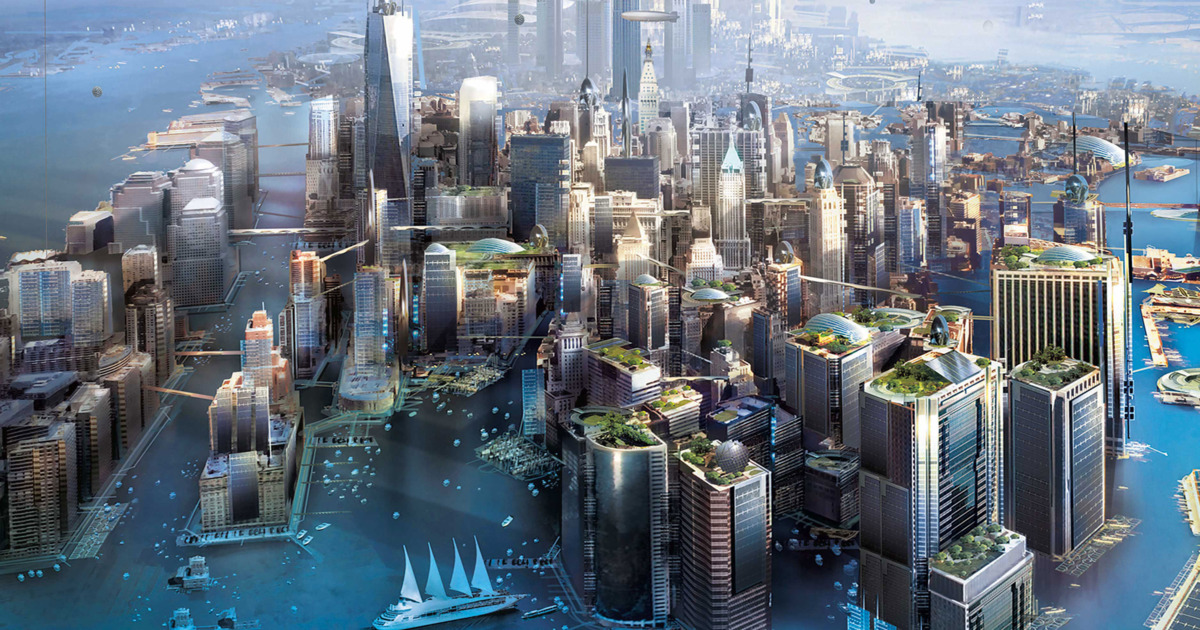 In New York 2140, Kim Stanley Robinson takes on one of the almost unimaginable yet probable outcomes of climate change: that in the foreseeable future, some of New York City will be underwater. Of course, Robinson does not adhere to the most conservative estimates of sea-level rise. But in redrawing the New York Harbor to be 50 feet above sea level, he does stay inside what he has called, in an interview with Scientific American, “the extreme edge of what’s possible” based on somewhat controversial projections of Antarctic ice melt.

From this single extrapolation Robinson derives the rest of his transformed world: 50 more feet of water means that lower Manhattan, up almost to Central Park, is either underwater or in an “intertidal zone” that is navigable by foot at some points in the day and by boat at others; that Brooklyn is submerged up to Foster Avenue; and that the South Bronx has disappeared. While canals have replaced streets in many cases (Canal Street becomes Canal Canal), and many still-wealthy Manhattanites flit around in small speedboats, others take to the air, either in steampunkesque airships or on a network of “skybridges” connecting the city’s rooftops. Still others have fled entirely; the New Yorkers who have stuck it out note with unconcealed disdain that the new economic capital of the country is not New York but Denver.

Robinson’s latest novel is remarkable in its ability to at once combine a narrative of disaster with a bold vision of possibilities. He not only reconciles the inevitabilities of climate change with the pressing need to build systems that can withstand it but also experiments with form to underscore his theoretical arguments. While the book is for the most part gripping, it can be overwhelming at times, and this is hardly mitigated by references to arcana like the Case-Shiller index (a measure of house prices). Nonetheless, the argument implicit in Robinson’s narrative and portrayal of this world is an essential one. New York 2140 exposes the violence inflicted by finance capitalism on the planet and the life that inhabits it while also showing that any meaningful response to climate change will have to combat the financialization of the economy on finance’s own terms.

Read the rest at Public Books